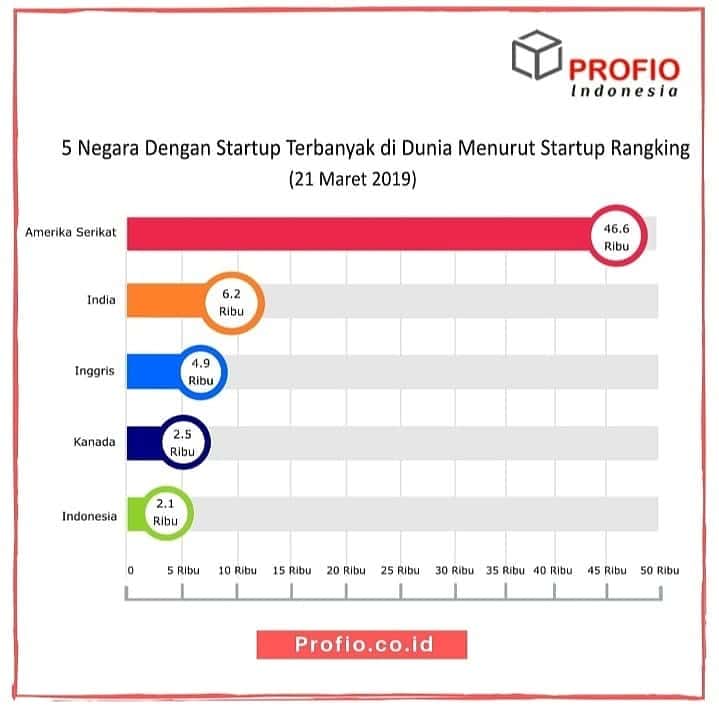 5 Countries with the Most Startup Around the World

Indonesia is the fifth largest startup in the world. Based on the Startup Ranking website as of March 21, 2019, the amount of Indonesian startups (technology-based startups) reached 2,074. This amount puts Indonesia in fifth position as the country with the most startups in the world.

The country with the most startups is the United States, which reached more than 46 thousand. Then followed by India has 6,181 startups, then Britain 4,909 and Canada 2,489 startups. The best startup in the world according to startup ranking is Medium. An American site that provides reading, writing and ideas from everyone, scores 90, 91. The best startup from Indonesia is Bukalapak with a score of 87.71 and is ranked 18th in the world.

The rapid development of technology has helped to change and have a significant impact on business models in this modern era. The emergence of startup companies in Indonesia is one example because their presence has had an extraordinary influence. Currently Indonesia itself has four startups that have unicorn status, namely Gojek, Tokopedia, Traveloka and Bukalapak.

If we look at startups in Indonesia, it is growing very fast day by day. One of the triggers is the easier and better internet connection. That is what makes more and more active internet users in Indonesia.

The large number of internet users is an opportunity for startup founders to develop their businesses into bigger ones. Today’s trends show that the potential for startups in Indonesia will continue to grow.